One of the major unsolved puzzles in superconductivity is the nature of the motion of penetrating flux lines. Magnetic flux enters a clean type II superconductor in the form of a regular triangular lattice of quantized magnetic flux lines (also known as vortices, since electrical currents whirl around each flux line). When this lattice is forced to move, by applying either an electric or a varying magnetic field, it maintains its regular periodic structure. The dynamics of this lattice of flux lines become more complicated when it is forced to move inside a disordered sample with pinning sites that can temporarily trap vortices. As the external magnetic field is increased, additional flux lines are forced inside the sample where their motion is impeded by defects. When pinning is weak relative to the driving force, the array of flux lines flows smoothly, with some minor distortions, and behaves as an elastic medium (that is, like a flowing rubber sheet). If the pinning forces are very strong, the flux lattice remains immobilized. In the poorly understood intermediate regime, when pinning and driving forces are comparable, vortex motion is not expected to remain elastic, but to become plastic---where parts of the flux lattice break loose from the rest. 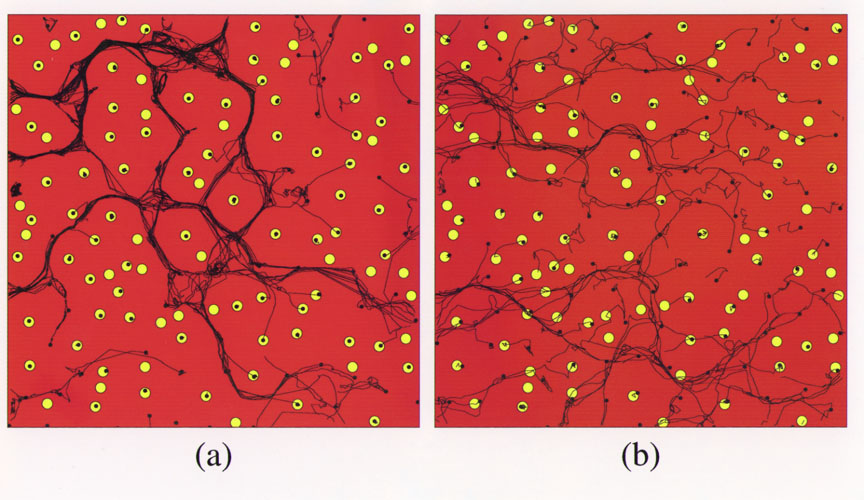 In this issue of Science, Tonomura and collaborators (1) present direct evidence of plastic flow of flux lines in a superconductor. Their experiments provide a striking motion picture of the onset of vortex motion that vividly illustrates the existence of flowing "rivers" of quantized magnetic flux that intermittently form, freeze, and reappear at different locations in the sample. These rivers flow around "islands" (or domains) of flux lines which are temporarily trapped by the pinning sites. The shape and size of these temporarily frozen islands abruptly change over time with every loading-unloading cycle. Movies of the phenomena (for figs. 5 and 6 on page 1393 of this issue) are available at http://www.aaas.org/science/beyond/htm.

Flux pinning in superconductors is of both technological and scientific interest (2). Practical applications of superconducting materials require that the magnetic flux lines be pinned, because the motion of flux lines dissipates energy and destroys the superconducting state. Therefore, it is important to understand how the trapping and depinning of flux lines occur. The complex nature of this onset of collective motion---with loading and unloading cycles, plastic motion, and intermittent avalanches---is not well understood, and it is the subject of current intense investigations in both superconducting materials and in a large variety of other systems: granular assemblies, magnetic bubble arrays, electron lattices in semiconductors, charge density waves, water droplets sprayed on a surface, and the stick-slip motion of two rubbing interfaces. These apparently dissimilar systems have interacting moveable objects (such as vortices, electrons, or grains) that repel each other and are pushed towards instability by an external driving force. During the unstable state, particle transport occurs in the form of avalanches or cascades which release accumulated strain in the system, and allow the medium to move to a nearby metastable state.The detailed nature of the onset of collective transport in these systems is still hotly debated and continues to be an exciting area of research.

A remarkable feature of the technique used by Matsuda et al. (1) is the ability to monitor the spatio-temporal dynamics of the vortex lattice while simultaneously imaging the large pinning sites irradiated on the sample. This technique, called Lorentz microscopy, allows the microscopic motion of individual flux lines to be seen directly. Their observation of flux-gradient-driven intermittent plastic flow is consistent with previous time-resolved experiments (3) and also with computer simulations (4) of vortices forced by an increasing magnetic field. Other studies of plastic flow (for example, (5,6)) focused on the different case where the flux lattice is driven by an applied electrical current, while in (1,3,4), the varying external field provides the pressure that forces the vortices through the sample. Moreover, previous experiments on plastic flow were indirect, since they did not image the spatio-temporal evolution of the vortex lattice.

Several "magnetic snapshots" of the flux lattice are presented in (1). These directly show how the flux lattice orders when either the field or the temperature are increased. The main results of (1) are summarized in figure 6, where succesive video frames show a vortex lattice with several "frozen" domains (top frame), vortex streets in the following two frames, and a new set of frozen domain structures (bottom frame). This partial flux flow, first described by Kramer (7) over 20 years ago, was believed to occur in the technically useful strong-pinning superconductors; (1) provides direct evidence supporting this view.

In order to better understand the factors that control the formation of the vortex rivers observed in (1), it is advantageous to analyze computer simulations (see figure) where, unlike experiments, material parameters can be continuosly varied. Indeed, both Lorentz microscopy and computer simulations are valuable tools for the analysis of the microscopic spatio-temporal dynamics of individual flux lines in superconductors, which are not easily observed by other means, lending insight to commonly measured bulk macroscopic quantities such as the magnetization and the critical current. These approaches can help elucidate the topological ordering of a driven plastic lattice interacting with a rigid one, a problem that has recently attracted considerable attention (3-6).

The figure, and Fig. 6 of (1), show paths through which vortices move, producing dynamically generated flux lattice defects or phase slips. This plastic flow is in contrast to the coherent motion predicted by elastic models. In both the figure and (1), the increasing external field provides the pressure which forces the vortices to move into the sample (8). The figure shows the top view of a small region of a larger sample. In (a) the pinning force is strong, and in (b) it is 10 times weaker. In (a) the vortex transport is characterized by trails of interstitial vortices which move around regions with flux lines that are strongly-pinned at defects, indicating that the interstitial vortices are flowing through the energy minima created by the strongly pinned flux lines. In (b) vortex transport proceeds in a different manner: pin-to-pin vortex motion, as well as interstitial, is possible and the previously-narrow vortex trails become considerably broader.

While most experiments only focus on the effects of random pinning distributions, some investigations (9) have used samples with periodic arrays of pinning sites (PAPS). These can greatly enhance pinning when parts of the flux lattice become commensurate with the underlying PAPS. Under such conditions, high-stability vortex configurations are produced which persist for an increasing current or external field. Flux lattice domains due to commensurate effects are visible in Figs. 3 and 4 of (1).

Other vortex matching effects have also recently been observed in a variety of different superconducting systems including Josephson junctions, superconducting networks, and the matching of the flux lattice to the crystal structure of YBa_2Cu_3O_7 due to intrinsic pinning. Non-superconducting systems also exhibit magnetic-field-tuned matching effects, notably in relation to electron motion in periodic structureswhere unusual behaviors arise due to the incommensurability of themagnetic length with the lattice spacing. Commensurate effects also play central roles in many other areas of physics, including plasmas, nonlinear dynamics, the growth of crystal surfaces, domain walls in incommensurate solids, quasicrystals, Wigner crystals, as well as spin and charge density waves. The magnetic motion pictures obtained in (1) allows one to easily visualize such commensurate effects which otherwise can rarely be directly resolved both in space and time. The characterization of intermittent plastic transport of an elastic lattice forced on a rigid substrate is not yet fully understood, and its intricacies continue to surprise.